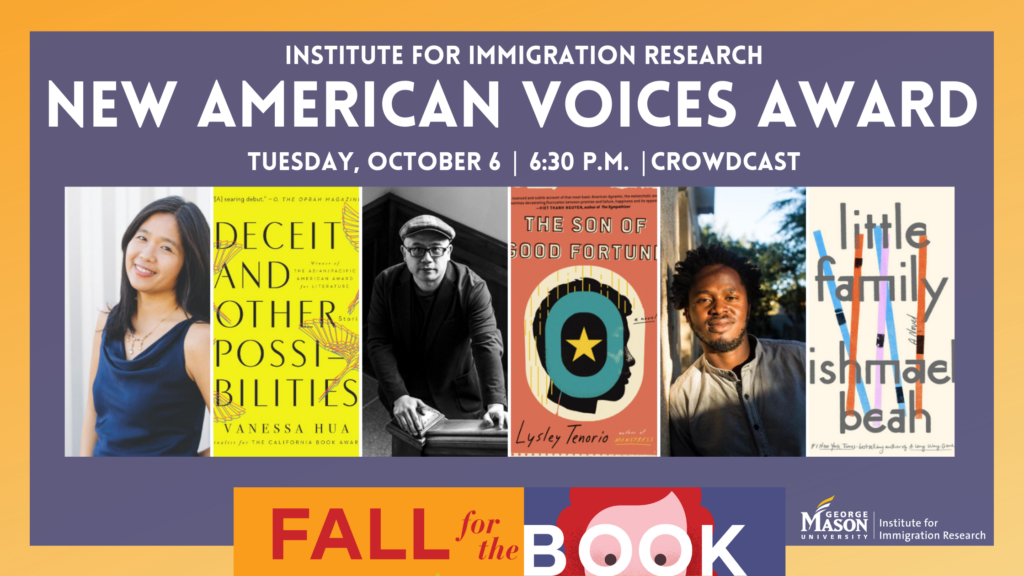 The three finalists for the Institute for Immigration Research New American Voices Award will each read from their books before the grand prize is awarded:  Ishmael Beah from his novel Little Family, about which judge Susan Muaddi Darraj says, “Beah documents their emotional and physical struggles to survive in language that is gorgeous and lyrical;” Vanessa Hua from her collection of short stories Deceit and Other Possibilities, about which judge Porochista Khakpour says, “Hua delivers one of those once-in-a-lifetime debuts that feels both remarkably established and yet thrillingly new;” and Lysley Tenorio from his novel The Son of Good Fortune, which judge Chika Unigwe calls “compulsively readable. With its cast of unforgettable characters and delightful prose, Tenorio has delivered a near-perfect novel.” Sponsored by the Institute for Immigration Research. 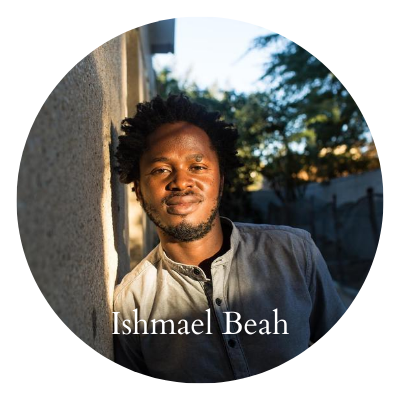 Ishmael Beah’s first book, A Long Way Gone: Memoirs of a Boy Soldier, was a #1 New York Times bestseller and has been published in more than forty languages. Among other work on behalf of young people affected by war, Beah is a UNICEF Ambassador and Advocate for Children Affected by War and a member of the Human Rights Watch Children’s Rights Advisory Committee. He lives in Los Angeles with his wife and their children. 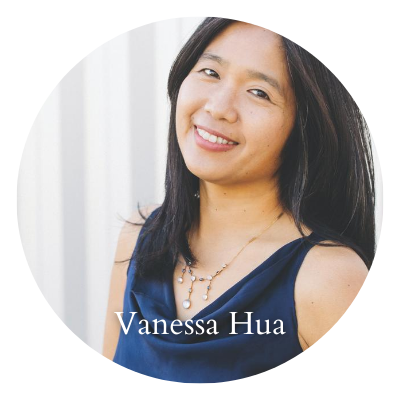 Vanessa Hua, a columnist at the San Francisco Chronicle, is author of DECEIT AND OTHER POSSIBILITIES and A RIVER OF STARS. A National Endowment for the Arts Literature Fellow, she has also received an Asian/Pacific American Award for Literature, a Rona Jaffe Foundation Writers’ Award, a Steinbeck Fellowship in Creative Writing, and the San Francisco Foundation’s James D. Phelan Award for fiction. She has received fellowships and support from Bread Loaf, Aspen Summer Words, Voices of Our Nation, Community of Writers at Squaw, and Napa Valley writing conferences. Her work has appeared in New York Times, FRONTLINE/World, PRI’s The World, The Atlantic, ZYZZYVA, Guernica, and elsewhere. She lives in the San Francisco Bay Area with her husband and twins. She teaches at the Writers Grotto, Warren Wilson MFA Program for Writers, and elsewhere. 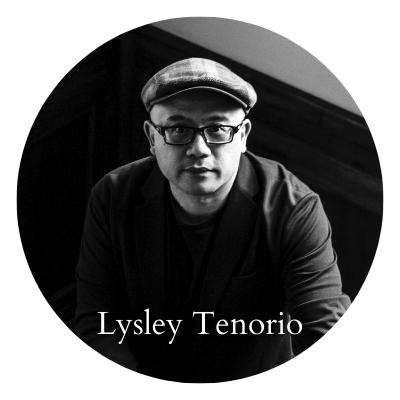 Lysley Tenorio is the author of the novel The Son of Good Fortune and the story collection Monstress, named a book of the year by the San Francisco Chronicle. He is the recipient of a National Endowment for the Arts fellowship, a Whiting Award, a Stegner fellowship, and the Rome Prize from the American Academy of Arts and Letters, as well as residencies from the MacDowell Colony, Yaddo, and the Bogliasco Foundation. His stories have appeared in the Atlantic, Zoetrope: All-Story, and Ploughshares, and have been adapted for the stage by The American Conservatory Theater in San Francisco and the Ma-Yi Theater in New York City. He is a professor at Saint Mary’s College of California. 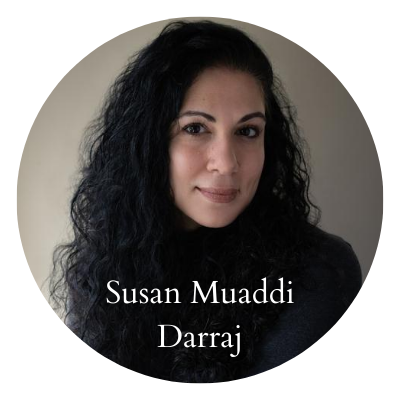 Susan Muaddi Darraj’s short story collection, A Curious Land: Stories from Home, was named the winner of the AWP Grace Paley Prize for Short Fiction, judged by Jaime Manrique.   It also won the 2016 Arab American Book Award, a 2016 American Book Award, and was shortlisted for a Palestine Book Award. Her previous short story collection, The Inheritance of Exile, was published in 2007 by University of Notre Dame Press.

In 2018, she was named a Ford Fellow by USA Artists. In 2019, she launched the viral #TweetYourThobe social media campaign to promote Palestinian culture. Later that year, she was named winner of the Rose Nader Award, by the American Arab Anti-Discrimination Committee (ADC), an award given by the Nader family to a person who “demonstrates an unwavering dedication and commitment to values of equality and justice.” 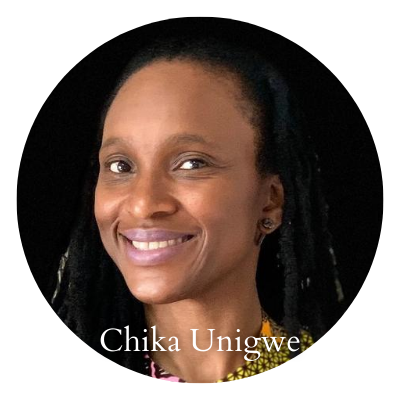 Chika Unigwe was born and raised in Enugu, Nigeria. She holds degrees from the University of Nigeria, Nsukka, the Katholieke Universiteit, Leuven Belgium and the University of Leiden, Holland. She is the author of four novels including Night Dancer and On Black Sisters Street , translated into many languages including Hebrew, Dutch, German and Spanish and has won awards for her writing. The  2016 Bonderman Assistant Professor of the Practice at Brown University, Providence, RI ,  a 2017-2019 visiting professor of creative writing at Emory University, Atlanta, GA, Unigwe is an Assistant Professor of creative writing at Georgia College, Milledgeville. In 2016, she was  Man Booker International judge. Her latest book is a collection of short stories, Better Never than Late. 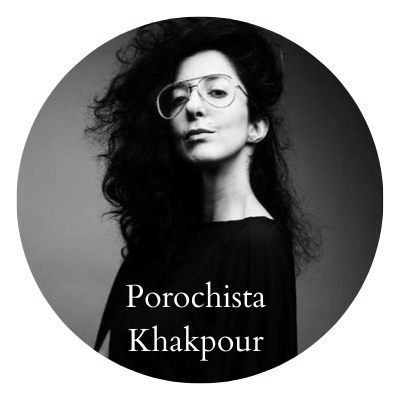 Porochista Khakpour’s debut novel Sons and Other Flammable Objects was a New York Times Editor’s Choice, one of the Chicago Tribune’s Fall’s Best, and the 2007 California Book Award winner in the “First Fiction” category. Her second novel The Last Illusion was a 2014 “Best Book of the Year” according to NPR, Kirkus, Buzzfeed, Popmatters, Electric Literature, and many more.  Her third book Sick: A Memoir was a Best Book of 2018 according to Time Magazine, Real Simple, Entropy, Mental Floss, Bitch Media, Autostraddle, The Paris Reivew, LitHub, and more. Her most recent book, the essay collection Brown Album, has been praised in The New York Times, O: Oprah Magazine, TIME, goop, USA Today, and many more. Among her many fellowships is a National Endowment for the Arts award. Her nonfiction has appeared in many sections of The New York Times, the Los Angeles Times, Elle, Slate, Salon, and Bookforum, among many others. She has taught creative writing and literature at Johns Hopkins, Wesleyan, Columbia, Bucknell, Bard, Sarah Lawrence College, and many other universities around the country. She lives in New York City.